You are here: Home / Tony Husemann 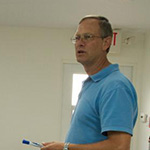 Dr. Tony Husemann was born in Baltimore, Maryland, on 2/16/55. He attended N. Harford High School and St. Mary’s College of MD on a National Merit Special Scholarship in 1973. He majored in Biology and minored in Mathematics, graduating with Honors in 1976 with a Bachelor of Science degree. Later, he attended Bowling Green State University graduate program, studying biology, but fell in love with teaching as a graduate research and teaching assistant while there.

Thus, he moved to California in 1978 and began his post-baccalaureate studies in Life Science Education at Sonoma State University in 1981. Later, he earned a Ryan Single Subject Teaching Credential in 1983 and taught in California public schools as a sub and full-time teacher from 1980-84. That year, he was recruited by a Church of God (Anderson, IN) mission school (Triple C School) in the Cayman Islands to teach science, math, health, computers and P.E. He continued to serve the Lord there until 1988, while also attending Columbia Bible College and Seminary in Columbia, South Carolina, via extension (now Columbia International University). He studied evangelism (EE), Missions (Certified Missions teacher) and English Bible in South Carolina until 1990, before transferring to the University of South Carolina to complete a Master’s of Education in Community and Occupational (Adult) Education.

At present, he is the Provost and Director of Graduate Studies, Research and Academic Development at the International College of the Cayman Islands, where he has been since October 2008. His teaching duties at CCU have included the development of more than half dozen different Christian teacher training courses since 2006, and he is currently covering Philosophy of Education, Advanced Teaching Methods, Current Issues in Education and School Leadership in addition to teaching Strategies for International Missions and Evangelism online for Horizon University of San Diego, California.

CCU is excited to announce it’s new articulation agreement with Northeast Biblical Institute. Students can now transfer in units earned from CBI towards a BA in Biblical Studies at CCU!