You are here: Home / Administrative Team

Assistant Director to the President

Wendy began serving in Christian education in 1996. She taught American Literature and World Literature at Horizon Christian Academy and served as the Dean of Women at Calvary Chapel High School in Costa Mesa. At Calvary Christian Academy in San Diego, she served as the Director of Curriculum and Instruction and Special Events Coordinator. Recently, she enjoyed her position as Director of Administration at Horizon University, starting in 2010. Wendy began serving at Calvary Chapel University in 2005 and looks forward to every opportunity to serve the students and faculty here. Wendy earned a Bachelor of Arts in Literature from Point Loma Nazarene University and a Master’s in Education at Hope International University. She enjoys reading almost anything, swimming in the ocean and playing with her two fabulous daughters and husband, Deven.

Deven began serving in Christian Education in 1993. He taught Band, Worship and Guitar at Horizon Christian Academy, Calvary Chapel Costa Mesa HS and Calvary Christian Academy in San Diego. ” I feel called to help people in their calling.  I believe that Christian education is one of the most effective tools God uses to fulfill Mathew 28:19 ‘Go therefore and make disciples of all the nations, baptizing them in the name of the Father and of the Son and of the Holy Spirit.'”

A recording artist, performing musician and worship leader for 25 years, Deven has performed on many albums and has released three solo albums. He has had the privilege of performing and leading worship in many countries such as Israel, Germany, Mexico, Austria, Canada, Russia, along with tours across the United States. Deven organized and hosted the Worship Xcellence-Youth Worship Conferences from 2000-2006. Deven earned a Bachelor of Arts in Communication from Seattle Pacific University and a Masters in Christian Education from Calvary Chapel University. He has served on the administrative team at CCU since 2012. Most importantly, Deven is married to his wife, Wendy, and has two daughters, Jane and Grace. 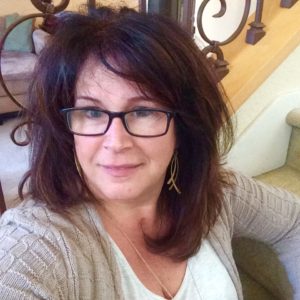 Pamela attended Horizon School of Evangelism in the 1991 and enjoyed a practicum in Russia where she worked with a team to share the gospel in a small village outside of St. Petersburg. She then assisted the Director of HSE for 5 years. She served on the board as President for Rancho Vista Church in Chula Vista. She was the Woman’s leader in a home-based bible study for 15 years. She has served as a small group leader in Woman’s Skills, and inner-healing ministry for 3 years thru North Coast Calvary Chapel. She has served as Secretary to the board of her church for 11 years. She currently enjoys being involved in the Healing Rooms ministry at her church.

She is passionate about applying the truth of the Word and who HE is and seeing it applied to our daily lives, inner healing, people set free and living abundant lives, women’s ministry and her amazing husband and sons.

Director of Library and Learning Resources

Codie pursued a Christian education in her undergraduate program at Pepperdine University, where she earned her Bachelor of Arts in Journalism with an emphasis in Creative Writing. She first served in Christian education at Calvary Christian Academy in San Diego as a Librarian and Director of Publications from 2004-2009. Codie went on to obtain her Master of Arts in Education with a Specialization in Library and Media in 2012. Following her work in K-12, she spent five years teaching undergraduate courses online and working as a policy and project manager specializing in accreditation, academics, and publications for a graduate institution. Codie is passionate about the Word of God and ministering to others, most importantly her family, which includes her husband, Michael and five beautiful children. You will often find her cheering them on from the sidelines of their sports games, relaxing with friends, or taking in the beauty of God’s creation. 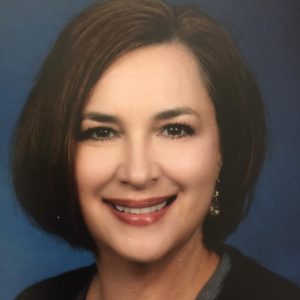 Donna Lien was brought up in a military family and has lived all over the country.  In June of 1992 she became a Christian was promptly called into the Horizon School of Evangelism where her foundation in Jesus was planted.  Through the years at Horizon she was a part of the Horizon Sports Ministry and had the opportunity to travel the world playing volleyball and ministering through sports.  In 2010 Donna went back to school to pursue her BA in History and is currently praying about furthering her education. Donna currently resides in San Diego County with her wonderful daughter, and two kitties.  Donna loves spending time outdoors, hiking, biking, and swimming in the ocean. She is also blessed to be a part of Calvary Chapel University. 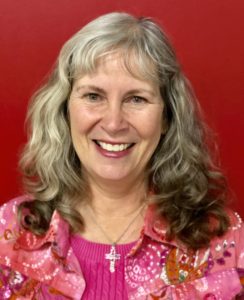 Pandora or “Pandy” Johnson volunteered at Maranatha Chapel as a children’s ministry teacher, VBS decorator, served in various women’s and family ministries.  Has worked as a self employed bookkeeper for over 20 years. Is a Quickbook ProAdvisor.  Born and raised in Imperial Beach and currently resides in San Diego.  Married to Dean Johnson since 1991, has 3 children, Lorie, Heather and Ned plus two Grandchildren Levi and Avery.  You can find her walking her dog, Kai, doing anything crafty, going to Bible Study and loves the outdoors. Favorite scripture:  Trust in the LORD with all your heart and lean not on your own understanding; in all your ways submit to him, and he will make your paths straight. Proverbs 3:5-6 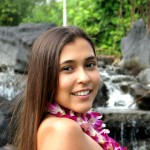 Lynette was born in Mexico and raised in the west Texas town of El Paso. Lynette came to know the Lord at age 11 and, at age 13, began serving with the Children’s Ministry at Calvary Chapel of El Paso until she graduated from high school. In 2006, Lynette attended Calvary Chapel Bible College in Murietta, California and, upon graduation in 2007, began an internship with Kauai Bible College. This led to a full-time position as the registrar for three years. Currently she serves as the academic administrator at Calvary Chapel University. She resides on the beautiful island of Kauai with her husband Jason, where they continue to serve with the Saturday night children’s ministry at Calvary Chapel Kauai. Lynette’s hobbies include walking, hiking, biking, snorkeling and camping on the various beaches of Kauai. Lynette loves to fellowship and share Jesus with anybody who will listen.

Kathy has been a faculty member at CCU since 2011. She currently serves as the Chief Academic Officer for CCU.  She also teaches a variety of courses at CCU including women’s ministry courses and general education courses.  Kathy is married to Pastor Jimmy Morales and they serve the Body of Christ at Calvary Chapel Lone Mountain in Las Vegas, NV. Kathy is the Women’s Ministry Director at her church and loves teaching the Bible, counseling, and leadership development. She holds a Doctorate in Educational Leadership from Liberty University (LU), a post-graduate degree as an Educational Specialist, and a Master’s degree in Business Management & Leadership all from LU. Kathy is grateful to God for the privilege of teaching at Calvary Chapel University. Her favorite scripture is Galatians 2:20: For I have been crucified with Christ; it is no longer I who live, but Christ lives in me; and the life which I now live in the flesh I live by faith in the Son of God, who loved me and gave Himself for me.

Director of Internal Operations and Communication 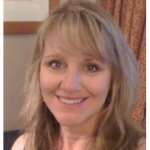 Christine Marsh, a graduate of Arizona State University and Horizon School of Evangelism, is honored to be serving the Lord by helping CCU students fulfill the call God has for them. Recently transplanted from San Diego to Phoenix, Arizona; Christine loves her wonderful husband, three fabulous children and puppy,  ‘Indy’. She loves studying end-times prophecy, holistic health, music, swimming, biking and friends. Mostly, she loves spending time with Jesus. 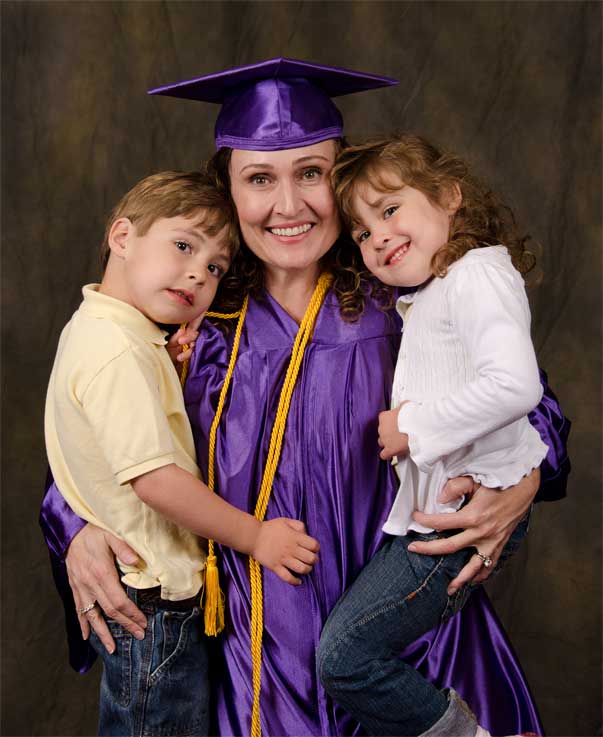 Leigh was born and raised as part of the military community, living all over the country and — for a small time as a young child — in Japan.
Leigh came to know the Lord as a freshman in college at the University of Illinois. In 1992, Leigh began her teaching career as a mathematics teacher at Horizon Junior/Senior High School in San Diego, California and finished her teaching career working as a mathematics teacher at La Jolla High School. In 2008, after 16 years of praying and trusting God, Leigh became mom to a beautiful set of twins, and they became the focus of her full-time ministry. Currently, Leigh has just completed a degree in Graphics and Web Design in San Diego, hoping to instill the culture of education in her amazing children and use her new skills to serve the Lord. Leigh’s hobbies include reading God’s word, working for Calvary Chapel University and with her husband, as well as cooking for her family!  Leigh loves to worship the Lord and shares Jesus with those who ask her of the hope she has within her heart!

Click on the resource that best serves you! The Calvary Chapel University Ministry Resource Page is a posting resource to the church, pastors, schools, educators, students and ministry leaders with opportunities to serve and grow in discipleship. This page is broken into three areas: Ministry Partners, Ministry Positions, and Ministry Personnel.  If you have a Christian ministry, an open […]

Sorry, no Tweets were found.