You are here: Home / Jason Falzarano 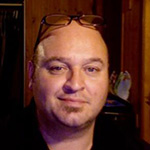 Jason Falzarano completed his Bachelor of Theology from Trinity Biblical University and also holds his Master of Theological Studies degree and a Master of Arts in Christian Apologetics from Veritas Evangelical Seminary. He is currently a professor in the Biblical Studies department at Calvary Chapel University.

Jason was ordained in 1999 by the Bible Fellowship Church denomination and served as a Youth Minister in one of its churches for three years. Upon leaving the BFC, he became the Assistant Pastor of Calvary Chapel New Brunswick in 2004. In 2007, Pastor Daniel Fusco ordained Jason and the Board of Elders promoted him to the position of Lead Pastor. He has been happily pastoring in New Jersey ever since.

Jason married his high school sweetheart, Lynda Ann Hall, in the Spring of 2000. They have one daughter, Jenna Marie, and one son, Joshua David. The Falzarano’s reside in beautiful North Brunswick, New Jersey.

In addition to pastoring and teaching, Jason has a deep passion for seeing college students trained and discipled to become effective leaders! He can often be found speaking at Cru meetings and other college style Christian ministries around New Jersey. Jason has recently began working on his Doctor of Ministry degree with the Antioch School of Church Planting and Leadership Development.

The Master of Divinity (M.Div) is a professional degree designed for students who already hold a bachelor’s degree and serve or desire to serve in such roles as pastor, missionary, teacher, theologian, professor, Christian counselor, chaplain, military or civilian.